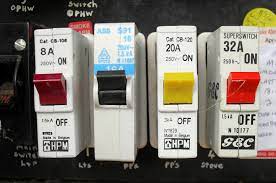 MCBs are used to protect against over currents and short circuits. This type of device is commonly found in residential and commercial settings.

Similarly, we check appliances like washing machines and refrigerators thoroughly before purchasing them, and we should also research miniature circuit breakers.

MCBs are more practical than fuses, requiring no replacement once an overload is detected. An MCB is more convenient to operate than a fuse and can offer more excellent operational safety and greater convenience without requiring a lot of maintenance. Low current circuits are protected using MCBs, consisting of the following features. This guide is all about types of Mcbs and all other info.

In addition, to types A, B, C, D, K, and Z, there are five other types of MCB. It is important to note that there are three main types: type B, type C, and type D. These are designed differently based on the likelihood that electrical surges will occur in different locations. They are commonly called a ‘trip curve’ or a ‘tripping characteristic’; however, they can also be called a ‘tripping characteristic’.

Listed below are the differences between each of the primary types:

Electrical circuit breakers of Type C are used for devices with more significant amounts of power, which are more likely to experience more significant surges. These are generally found in commercial and industrial settings.

Read more:Car Exterior Detailing: Each And Everything You Need To Know

The D-type MCB is the least sensitive type, only triggering when the current surges between ten and twenty times the standard level.

These MCBs are designed for heavy-duty commercial and industrial applications where there are occasional surges of a powerful current. There are welding equipment, X-ray machines, large motors, and uninterruptible power supplies, to name a few.

The trip points will be triggered when the current reaches eight to twelve times the maximum recommended value.

In this class, MCBs are highly sensitive, tripping when the current exceeds the rated load by two to three times. Often they are used with more delicate devices, such as semiconductors, that can fail due to short circuits.

As a rule, and under normal circumstances, the MCB acts as a switch (a manual switch) to turn a circuit on or off. The device trips when a short circuit occurs or when there is an overload. A current interruption occurs in the load circuit, which corrects the problem. During a trip, the operating knob automatically moves to the OFF position to indicate the end of the trip.

MCBs can be tripped automatically in two different ways: magnetically or thermally. Whenever a bimetal is overloaded, its temperature rises due to the current flowing through it. The heat generated by the rising temperature within the bimetal causes the bimetal to deflect.

The expansion of metals causes this to occur. Consequently, the trip latch is released, and the contacts are separated. A magnetic field created by the coil creates a force that pulls the bimetal, causing a deflection that activates the tripping mechanism in other MCBs.

Most MCBs are tripped by a combination of thermal and magnetic tripping mechanisms. Both mechanisms cause an arc to form when the contacts separate. An arc runner then forces the arc into an arc splitter. ARC splitter plates and arc chutes are referred to as arc splitter plates. A series of arcs is formed when energy and cooling are extracted from an arc. In this way, arcs are removed from the arrangement.

How to choose the right MCB?

In residential, commercial, industrial, or public buildings, there are several simple rules for selecting whether to use Type B, C, or D miniature circuit breakers for final circuit protection. After learning about the different MCB kinds, you should consider which would work best for your household device. Learning a few technical pieces of information is crucial before choosing the type of MCB. Check the voltage and frequency at which the device operates first, as well as if it is an AC or DC device.

The installer must be aware of the differences between these types of equipment to avoid tripping or make an appropriate selection where demarcation lines are less clear.

The primary purpose of circuit protection devices is to protect the cable downstream of the device, as opposed to miniature circuit breakers and fuses.

It is critical to compare the ability of Type B, C, and D devices to handle surge currents without tripping. Typically, these currents are accent or other discharge lighting, induction motors, battery chargers, etc.

When used in conjunction with a ground fault or arc fault mechanism, a miniature circuit breaker can be utilized efficiently. If a live wire contacts a transmitter surface outside of the circuit system, a ground fault will occur. An overcurrent will increase the current flow rate if there is a fault in the circuit. In the event of an MCB trip, the magnetic tripping mechanism activates and corrects the circuit.

By installing miniature circuit breakers correctly, you can ensure the safety of all electrical systems throughout the home and in workplace.

Whether used in small or large-scale industries, miniature circuit breakers can provide reliable safety. The typical power supply requirement for most machinery in industries is up to 30 kA. MCBs should be used instead of old fuses if this is the case.

The main functions of MCBs in commercial establishments are to maintain the efficiency of applications and installations by optimizing the flow of electricity. Hotels, supermarkets, and bakeries are examples of establishments that use them extensively.

Benefits of MCB over Fuse

Fuse and MCB are both devices that protect against power surges. However, MCBs have the following advantages:

Is there a type of MCB that is best?

The MCB type C can better serve domestic appliances, where the average current flow is 5-10 times more than usual. Type C MCBs trip when the current flows five to ten times as usual. MCBs of type D are durable since they can withstand ten to twenty times the current rate.

How do you define MCCB?

Molded Case Circuit Breakers, on the other hand, are abbreviated as MCCB. It is a device that protects a circuit from overloading. Furthermore, it has a manually operated switch for tripping the circuit.

How to Monitor Employee Performance with Computer Monitoring Software?

A Comprehensive Overview Of Cost Of Living In Manchester

Abdul Rehman - September 1, 2022 0
Cost of living in Manchester Manchester is a prominent city in the United Kingdom. It is recognized for its culture, customs, and work prospects for...

Digitalization Is Transforming Small and Medium Equipment Leasing Businesses and How

Ghiselle Rousso - November 24, 2022 0
The current global economic uncertainty has been unforgiving to all. But small and medium-sized equipment finance businesses have been some of the worst affect....
Go to mobile version